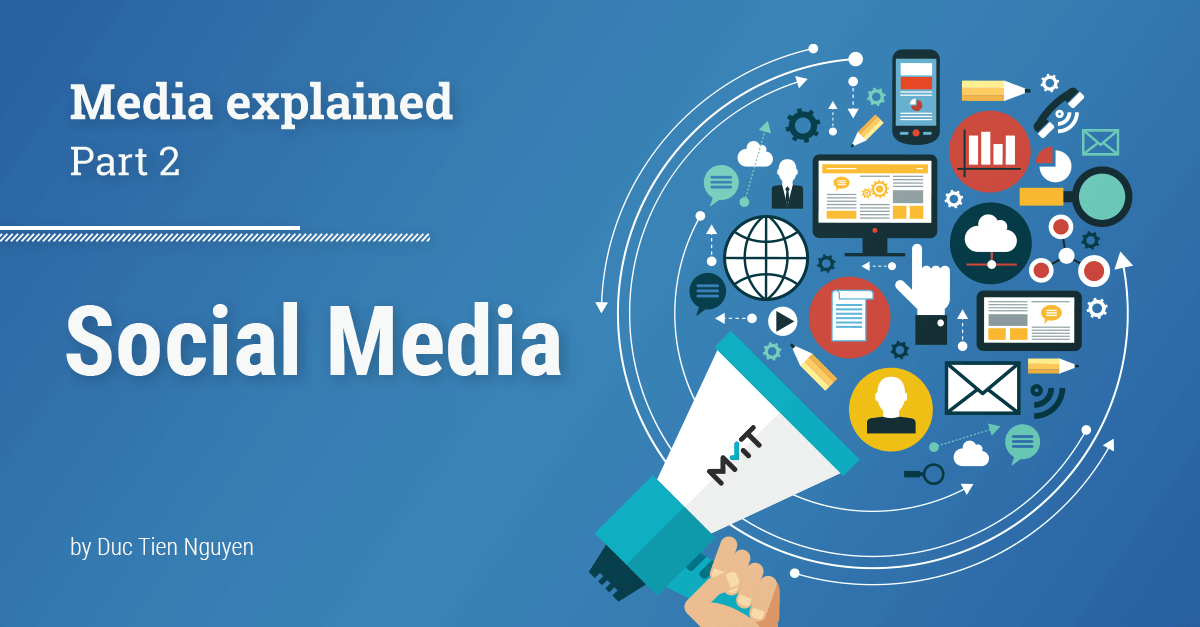 In the last article of our series “Media explained”, we discussed mobile advertising and its characteristics as well as the pros and cons of using this channel.

In this article, we will focus on one of the most important channels for advertising: Social Media. Zenith Optimedia forecasts expect the Social Media platforms to overtake TV in terms of ad spend in 2022. We will provide you with a better understanding of the channel itself and its attributes, and what marketers should pay attention to when they run a marketing campaign on Social Media.

What is Social Media?

There are different categories of Social Media but the common features across all of them are the following:

What makes Social Media powerful is the ability to connect with anyone on the planet, or across multiple users at once, creating a network effect. Briefly explained, a network effect occurs when a good service becomes even more valuable when there are more participants or people involved.

According to CBS NEWS, Classmates was the ancestor of the trend, offering profiles and friend connections back in 1995. The first Social Media listed was SixDegrees in 1997, named after the "six degrees of separation" concept.

Like every technology, Social Media is a continuously changing and evolving field. One can only take a snapshot at a given time to illustrate its current reach and impact.

According to the Digital Report 2022 from We Are Social: 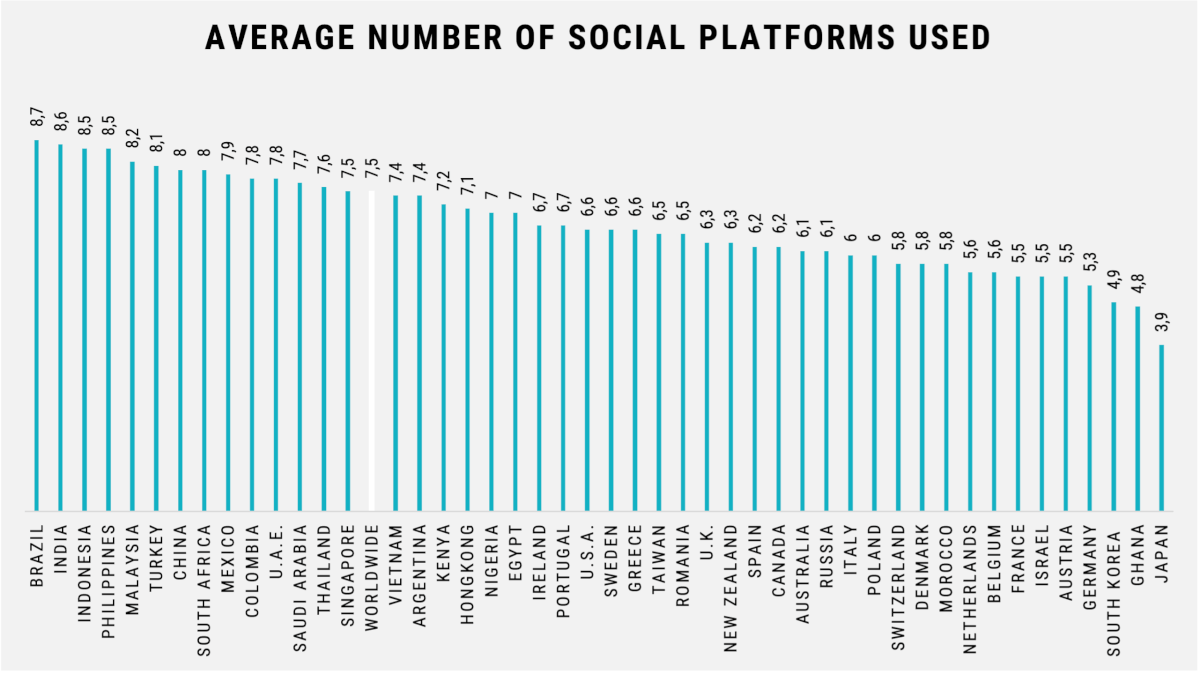 What is the usage model for Social Media? 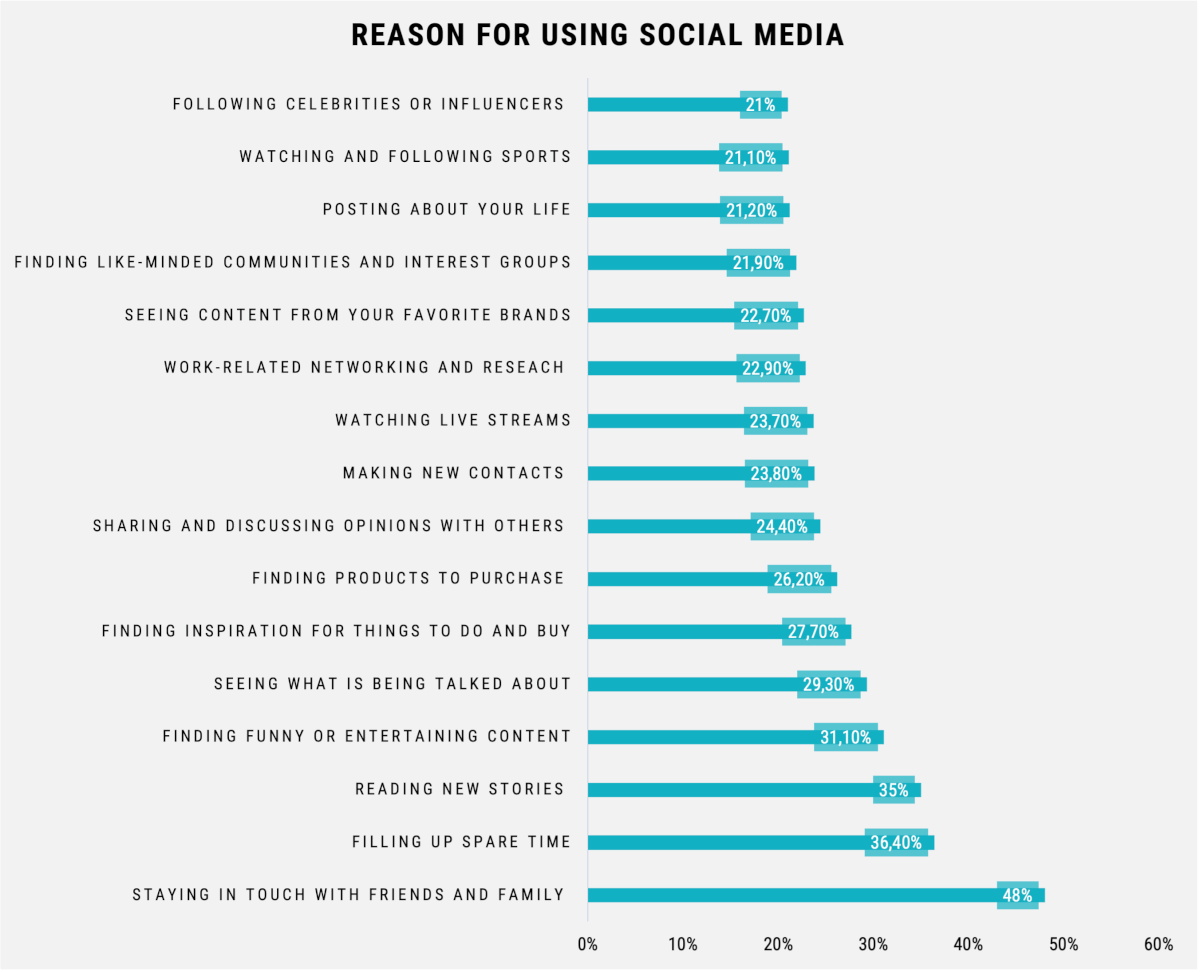 Most important reasons for using Social Media in 2021 (Source: datareportal)

What are the major Social Media platforms?

Although the exact number of social platforms is hard to count, the best shot by far would be the one taken by the Influencer Marketing Hub, which lists 103+ social sites available globally.

Some countries and regions have their local platforms, which are unknown anywhere else in the world. Yet not all of them have a large active audience. Here are the top 30 Social Media platforms from all over the world with at least 100 million active users monthly. 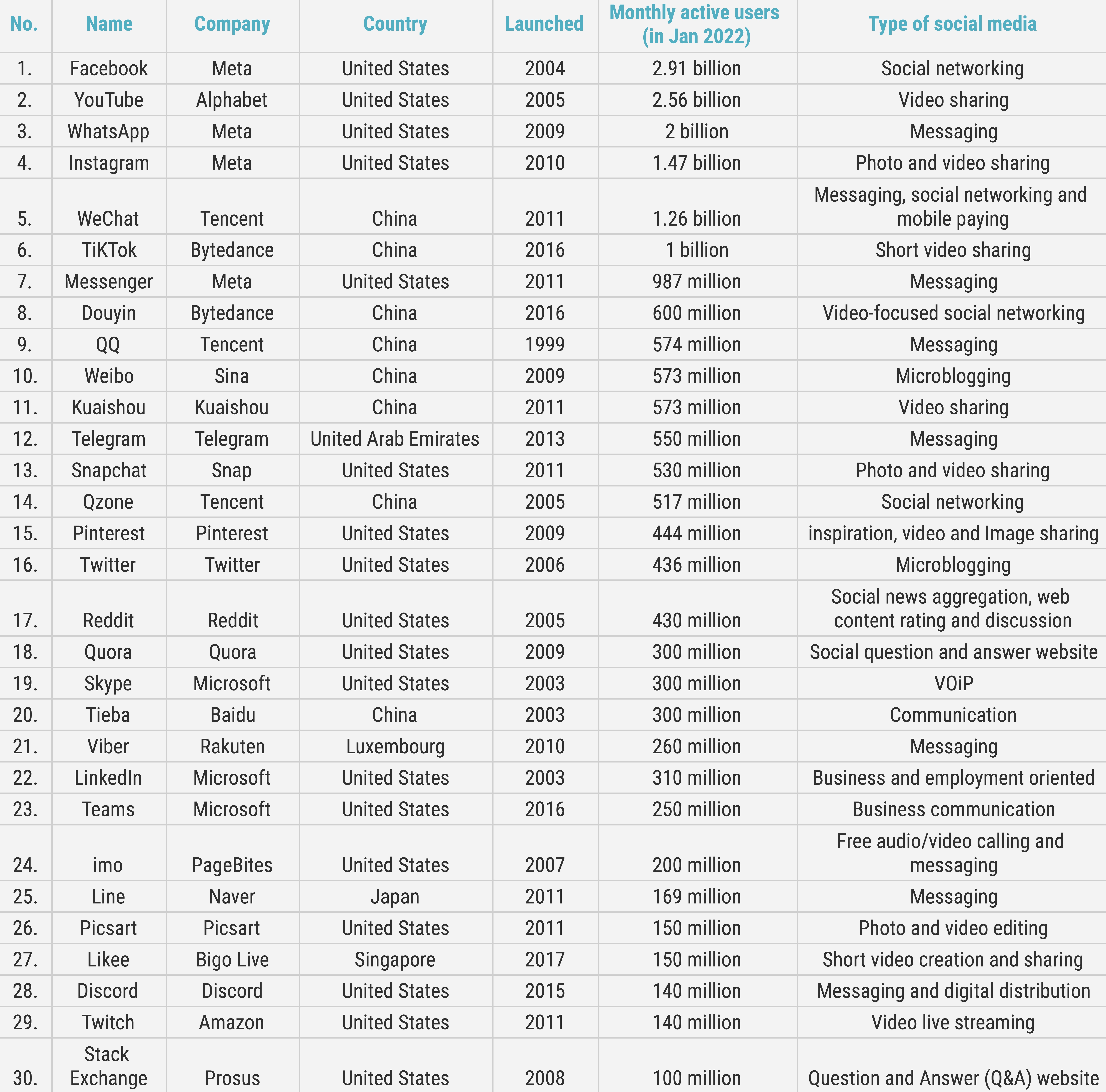 What is marketing in Social Media and how to manage it?

The term Social Media Marketing refers to the use of social networks to market a company's products or services, such as by placing Facebook ads, involving influencers, or otherwise creating an online presence to engage with customers. Marketers can track the success of their Social Media Marketing efforts using relevant analytics tools.

Here are some examples of Social Media Marketing formats:

What are the pros and cons of Social Media as an advertising space?

Social Media is indeed an excellent opportunity to expand your business. Here are some benefits of Social Media Marketing :

However, there are also some drawbacks of Social Media:

Where to start with Social Media?

Businesses use Social Media for their marketing campaigns to target consumers right on their phones and computers in order to build long-term loyalty and establish a brand culture.

Here are some recommendations for a successful marketing campaign in Social Media:

With more than 3.8 billion users at the moment - and that number keeps rising - Social Media has taken the world by storm in less than 20 years. Allowing users to stay connected with friends, find information easily, and add their own personalities to the online world, social networks are here to stay. Businesses can use Social Media to market to consumers in so many different ways that the probablity of conversion is higher than ever before.

To effectively monitor and optimize Social Media advertising campaigns, MMT Mercury and MMT Scout offer the best combination of end-to-end media management modules. MMT Scout provides clients with smart dashboards tailored to their individual needs so that they can see how their social campaigns perform and optimize them on the run. Our ready-to-use products and specially crafted services enable direct cost savings and lay a strong foundation for your company’s digital transformation by allowing you to address your needs in a future-driven manner.

Hello, I am Duc Tien and I go by the initials @ndtien0811 because I was only creative enough to combine my whole name and my birthday. I go to the HAW Hamburg and have my BA in Media and Communication. My passion for writing started years ago when I first began to write just for fun. It was then turned into a long term commitment - since writing some commentary words to the pictures on my blog became such a therapeutic hobby. As a working student at MMT, I get the chance to dive in the media world and to combine it with my writing hobby in order to spread the knowledge I learn from here to everyone else. There is nothing I love more than acquiring new knowledge, spreading it with someone else, hearing different opinions and seeing other perspectives. I hope you enjoy reading my words as I enjoy writing them,