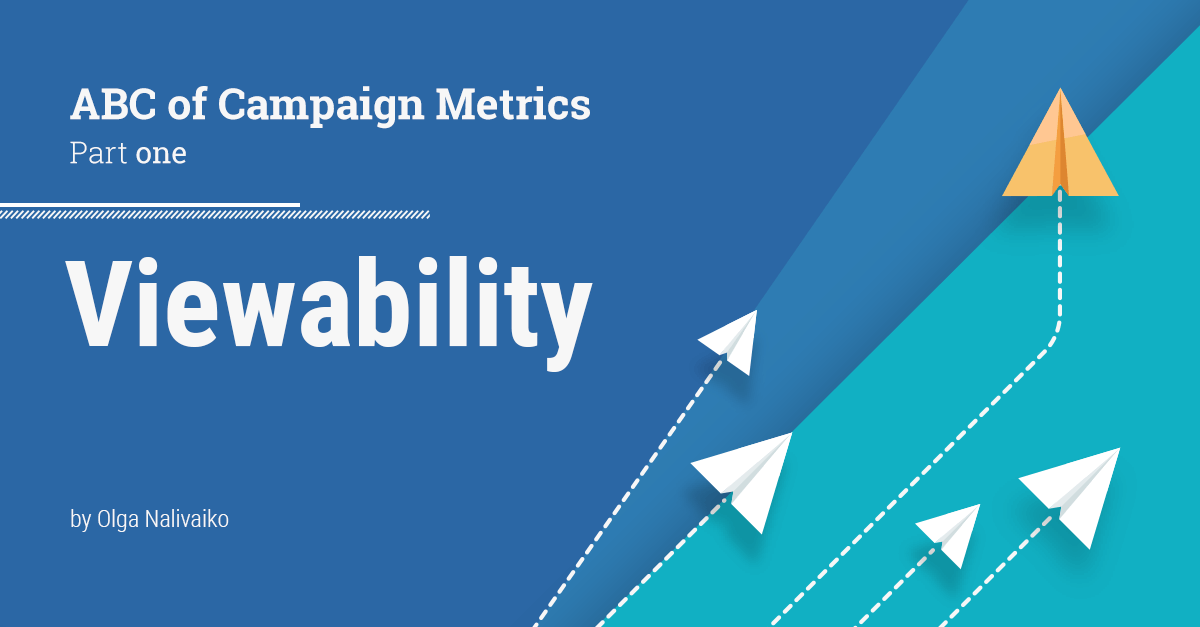 It’s a well-known fact that Digital Advertising offers far better targeting and performance tracking opportunities than traditional channels like TV or published media. However, it has its own challenges and deficiencies. Imagine you have a campaign running online and you see that impressions are hitting the targets but somehow the click-through rate is below your expectations – and so are your conversions. What could the problem be?

One of the possible answers is viewability – displaying an ad does not always mean the user gets to see it or looks at it long enough to get the message. Measuring viewability is key to taking appropriate and timely measures to improve your campaign’s performance.

Definition Viewability
Viewability rate is defined as the percentage of the total number of impressions served that actually had the chance to be seen by the user. The data necessary to calculate this rate comes from the ad verification provider or DSP.

When is an impression considered viewable?

Unfortunately, there’s still a lack of consistency around the definition of a “viewable impression“ and the best methods to measure viewability. The most widely adopted standard comes from the Media Ratings Council (MRC) and Interactive Advertising Bureau (IAB):

Who provides the viewability data?

Nowadays, viewability is a key metric for programmatic traders and buyers when managing campaigns. All major DSPs include it in their reports. In addition, there are independent ad verification vendors such as Integral Ad Science, MOAT, or DoubleVerify.

What are the benchmarks for the viewability rate? 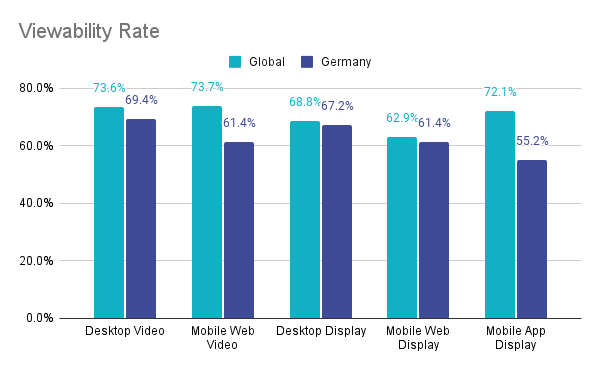 However, there is no “one-size-fits-all” benchmark with respect to viewability. First of all, it depends on the campaign goals. If the key goal is raising brand awareness and impressions are more important than clicks or conversions, then the target viewability should be at least 60-70%.

If the goal is conversions, viewability is not so relevant. You can go with lower viewability figures – as long as your performance goals are met.

It’s impossible to optimize both viewability and performance at the same time so in every case, you need to strike the right balance between the two.

How do advertisers use viewability in their decision-making process?

As advertisers become more sophisticated and more aware, they go from simply looking at the data to questioning it and developing new standards. The values of viewability depend greatly on what we consider viewable and how we measure it. More and more often advertisers assess viewability in connection with other metrics that characterize attention and engagement, thus adopting a more holistic approach.

"…what I see across the region … particularly in the UK, in Germany and in France, is that viewability standards align on very high levels. However, there is one striking difference between advertisers: some take viewability data at face value and others probe into the data. … For some advertisers viewability still is a box-ticking exercise: … as soon as the metric is there - fine, problem resolved. You can show it to the CMO, you can show it to someone else in the organization and say, ‘Look, everything is wonderful’ … But others are probing and saying, ‘No, we need to have better standards on what is viewable, how long something is in the view, are the IAB minimum thresholds … enough or do we need to do more, can we trust the reports that our vendors are providing?’ And this is really a much more proactive approach to viewability that I think separates the leaders from the laggards."

What are the possible causes of low viewability?

In programmatic display and video campaigns, the reason for low viewability figures could be the low CPM bids on the DSP. In that case, the ad is often displayed in a less desirable position, i.e. “below the fold” - in the portion of a webpage that a user must scroll to see.

Moreover, if you are optimizing towards another objective, the DSP will prioritize other metrics above viewability.

Another possible cause is heavy ads that load too slow to be registered as “in view”.

How to increase the viewability rate?

There are several key factors that affect the viewability rate of your ads. You can achieve better results in your campaigns by following the below guidelines: